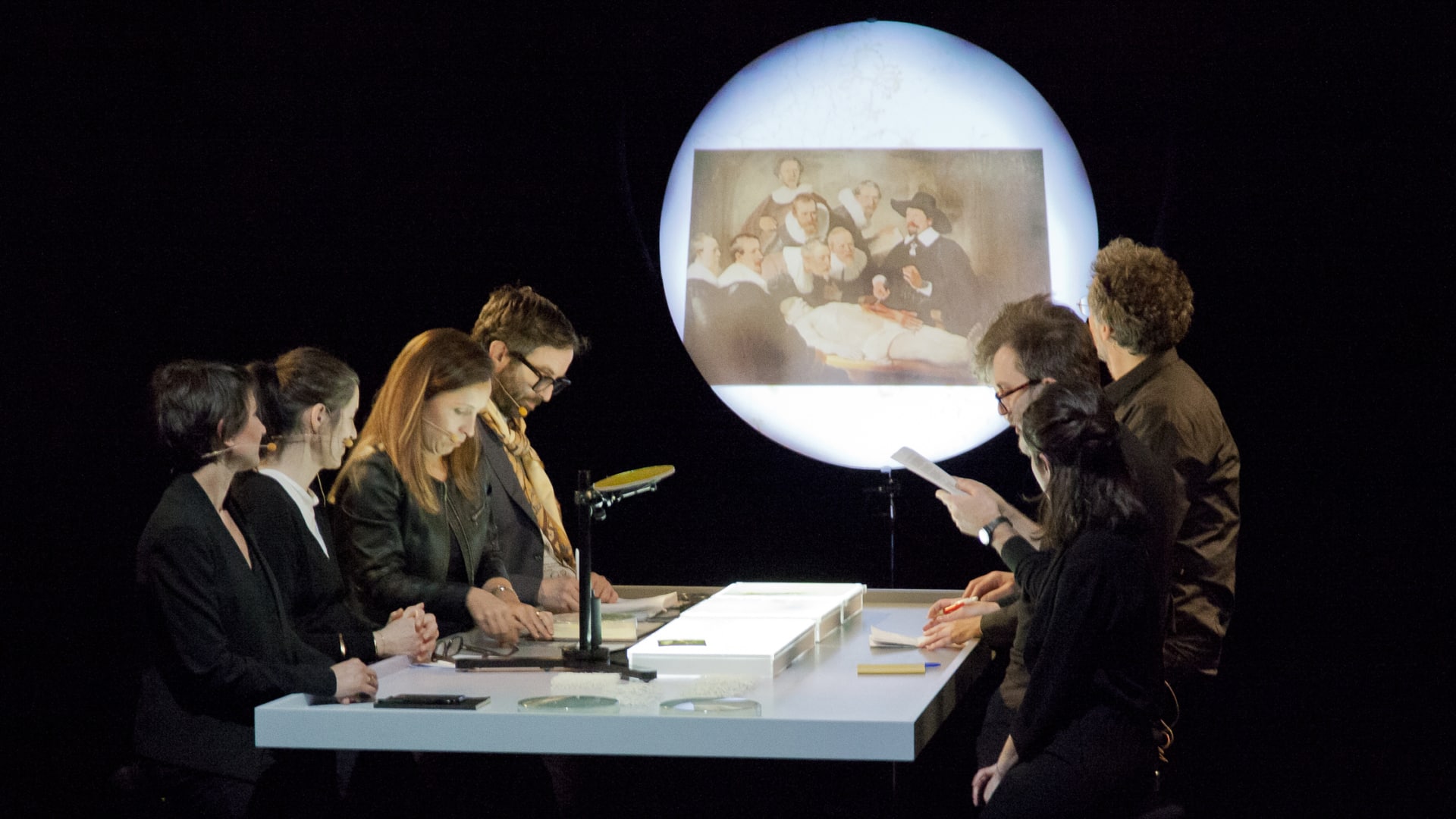 On November 2nd and 4th 2022, two Dissect events will take place at Tieranatomisches Theater (TA T) in Berlin. The first one will feature the work Amygdala of contemporary artist Marco Donnarumma in connection to the research led by the group Cutting of the Cluster of Excellence »Matters of Activity« at Humboldt-Universität zu Berlin (HU). For the second event on November 4th, go here.

Organized by the Cluster of Excellence Matters of Activity. Image Space Material at Humboldt-Universität zu Berlin, in partnership with the Chaire Arts & Sciences of the École polytechnique, the École nationale supérieure des Arts Décoratifs (EnsAD)—Université Paris Sciences et Lettres (PSL), and the Fondation Daniel et Nina Carasso; the Kunstgewerbemuseum in Berlin, and the Tieranatomisches Theater.

Joffrey Becker obtained a PhD in social anthropology and ethnology from the EHESS, and is a research associate of the anthropology of life team at the Laboratoire d’Anthropologie Sociale (Collège de France). His research focuses on robotics and artificial intelligence, and more particularly on the relationship between humans and machines. Initially interested in the construction procedures of humanoid robots and the mental processes they bring into play in interaction situations, his work today aims to better understand how so-called intelligent systems question our models on an ontological, interactional and societal level, regardless of their form. In a collaborative, interdisciplinary, and critical perspective, the challenge is to study how objects resulting from robotics and artificial intelligence transform relationships and practices in order to better anticipate their effects.

Maaike Bleeker is a theatre studies professor, a dramaturg, and a translator. Her work combines approaches from the arts and performance studies with insights from philosophy, media theory, and cognitive science. Much of her research focuses on processes of embodied and technologically mediated perception and transmission, with a special interest in the relationship between technology, movement, and embodied perception and cognition. Current research subjects include social robotics, spectacular astronomy and the intersection of performance studies and space studies, posthuman performativity, corporeal literacy, digital archiving of artistic work, and artistic creation processes.

Samuel Bianchini is an Artist and Associate Professor at École Nationale Supérieure des Arts Décoratifs – Paris (EnsAD)/ PSL Université de recherche Paris Sciences et Lettres and and Associate Member of the Cluster of Excellence Matters of Activity at Humboldt-Universität zu Berlin. Supporting the principle of an »operational aesthetic«, he works on the relationship between the most forward-looking technological »dispositifs«, modes of representation, new forms of aesthetic experiences, and sociopolitical organizations, often in collaboration with scientists, and natural science and engineering research laboratories. His works are regularly shown in Europe and across the world. After defending his PhD thesis in an art center with a solo exhibition, and, more recently, his accreditation to supervise research, Samuel Bianchini is now the head of the Reflective Interaction research group at EnsadLab, the laboratory of EnsAD, and the Co-Director of the »Chaire Arts & Sciences« recently founded with École Polytechnique and the Daniel and Nina Carasso Foundation. He is a member of the SACRe Laboratory of PSL University and involved in its doctoral program for which he supervises the PhD in Art and Design. He is also member of the canadian research-creation network Hexagram.

Horst Bredekamp is Professor of Art & Visual History at Humboldt-Universität zu Berlin and was Director of the Cluster of Excellence »Image Knowledge Gestaltung« from 2012 to 2018. In 2000, he founded the project The Technical Image at the Hermann von Helmholtz Center for Cultural Techniques. Bredekamp has been a Permanent Fellow of the Wissenschaftskolleg 2003 to 2012, from 2008 to 2016 he has directed the DFG (German Research Foundation) Centre for Advanced Studies in the Humanities and Social Sciences Picture Act and Embodiment, which merged into the project Picture Act and Body Knowledge with the foundation of the Cluster of Excellence »Image Knowledge Gestaltung«. From October 2015 to August 2018 Bredekamp was one of the Founding Directors of the Humboldt Forum.As Senior Co-Director Bredekamp leads the Cluster »Matters of Activity« together with Peter Fratzl, Claudia Mareis and the Director Wolfgang Schäffner.

Johann Habakuk Israel is Professor of Applied Computer Science and Multimedia at the University of Applied Sciences Berlin (HTW) and an Associated Investigator at the Cluster of Excellence Matters of Activity. Moreover, he is a member of the Research Cluster »Creative Computing« and member of the Managing Committee of the special interest group »Be-greifbare Interaktion« (Tangible Interaction) of the Gesellschaft für Informatik. His research focuses on immersive sketching, intuitive interaction, tangible interaction, 3D interaction in virtual environments, information visualization, and transdisciplinary research.

Thomas Picht is a Neurosurgeon, head of the Image Guidance Lab, and co-director of the Berlin Simulation and Training Center at Charité – Universitätsmedizin Berlin. His research group deals with non-invasive brain function diagnostics, connectivity analyses, and neuromodulation with the aim of optimally treating brain tumors with individualized therapy concepts. Further focal points are the research of modern visualization strategies for the understanding and mediation of spatially complex structures as well as the establishment of novel simulation concepts in education and surgical practice. His research group is in close contact with a large number of medical device manufacturers and start-ups. His comprehensive clinical and scientific experience in dealing with the highly dynamic materiality of the brain is decisive for the »Cutting« project of the Matters of Activity Cluster of Excellence at Humboldt-Universität zu Berlin.

Margrit Shildrick is a Guest Professor of Gender and Knowledge Production at ERG, Stockholm University, and Visiting Professor of Critical Disability Studies at York U., Toronto. Margrit does research in recent Continental Philosophy, Ontology, Epistemology, and Bioethics. Her new book Visceral Prostheses, biotechnologies, and posthuman embodiment (Bloomsbury) has been published in 2022. She is currently working on a project on decolonizing the gift in a posthuman context.

What if We Could Control Clouds?