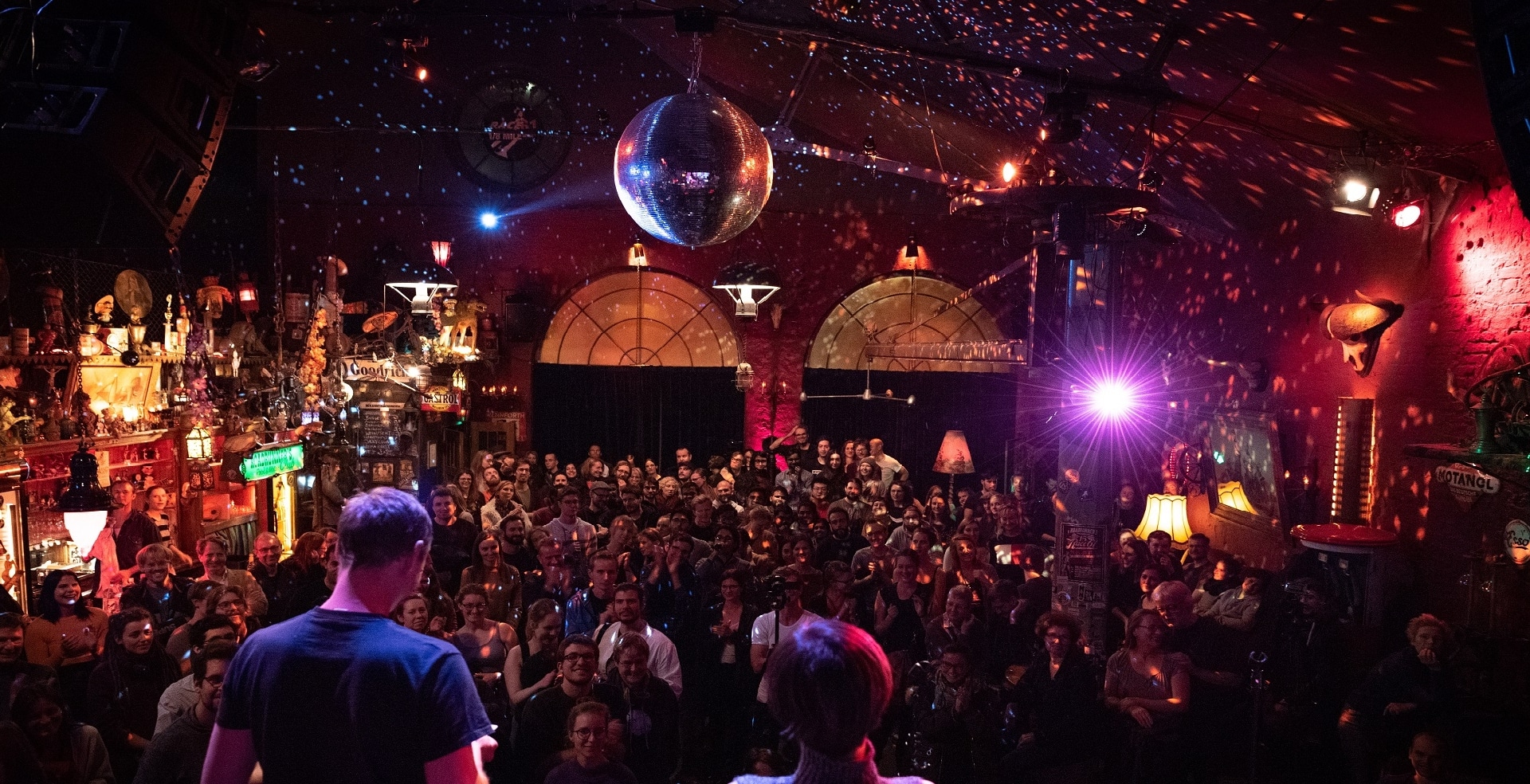 At our cluster science slam, scientists try everything to entertain their audience, regardless of whether the subject is e.g. mathematics, neuroscience or active material. The sky is the limit when it comes to what’s possible. Costumes, props, movies, power-point presentations or other experimental setups – it is all allowed. Only time sets the limits – every slammer will have ten minutes at most. And the audience will decide which presentation is best!
Constitutional Hardball in Action (Robert Benson)
How to Make the U-Bahn Go Brrr (Enrico Bortoletto)
Tuning in to the Sound of Fish (Antonia Groneberg)
Searching for Intelligence (Benjamin Lang)
In Search of Lost Chaos (Guillermo Olicón Méndez)
Knowing the Nature’s Messengers (Ramprasad Misra)
Nature Knows Best (Alina Pushkarev)
We Have a Dream (Juliet Roudini)

This is an in-person event. If you would like to attend, please book your tickets by sending an email to Maddalena.andolfato@charite.de.

Tickets are also available at the evening ticket office.

Dr. Alina Pushkarev holds a PhD in Marine microbiology from the Technion – the Israel Institute of Technology, where she found a new family of light reactive proteins and published it in Nature. Currently, she holds a postdoctoral position at the laboratory of Prof. Peter Hegemann at the Humboldt University of Berlin, where she researches the properties of the light-harvesting proteins in the eyes of Mantis Shrimp.

Antonia is a neuroscientist studying social behavior and the underlying brain circuits in small, transparent fish. After studying neuroscience at the University of Heidelberg, she did a PhD at the Champalimaud Center in Lisbon, Portugal. Since 2019 she is a postdoctoral researcher at the Charité Berlin.

Enrico Bortoletto is a PhD student and research assistant at the Zuse Institute Berlin in the Department of Network Optimiziation. He received his BSc degree from the University in Padua (Italy) and his MSc degree from Freie Universität Berlin. His current research focuses on novel geometric and algorithmic ideas for solving combinatorial optimization problems, particularly regarding planning and operations of public transportation networks. Other than mathematics, he enjoys playing rugby and chess.

Guillermo Olicón Méndez is a postdoctoral researcher at the Freie Universität Berlin in the research group Random and Multiscale Dynamical Systems. He received his BSc and Msc degrees from the National Autonomous University of Mexico and his PhD from Imperial College London. His research lies in the intersection between Dynamics, Probability, and Mathematical Modeling. In particular, he uses mathematical methods to better understand the behavior of chemical reaction networks.

Cluster of Excellence – Science of Intelligence

Benjamin Lang obtained his B.Sc. in Biosciences and his M.Sc. in Molecular Biosciences from Heidelberg University, majoring in Infectious Diseases. Before joining SCIoI in 2020, he carried out his master thesis project at the MRC-Centre for Virus Research in Glasgow, where he investigated the host-response to type III interferons at the single-cell level. While previously using mice as disease models, they now serve as a model organism to study social learning in his doctoral project. The investigation of social learning strategies with respect to the impact of affective states and emotional signaling will lay the basis for the synthetic modeling of social reinforcement learning.

Dr. Ramprasad Misra is a Research Associate in the Hegemann Lab at the Humboldt University of Berlin, trying to understand the structure and function of enzymerhodopsin, a class of proteins that has potential for use in Optogenetics, a technique that allows the manipulation of cellular functions by light. Earlier, he worked on thermal stability and light harvesting processes of microbial retinal proteins, whose congener assists us in dim light vision. An author of two books, who has worked at and travelled to several countries, loves to write about his experiences with people around the world and science he works on.

Since 2018, Robert Benson is a researcher at WZB Berlin and a PhD-student at the Berlin Graduate School of Transnational Studies (BGTS) of the cluster of excellence “Contestations of the Liberal Script (SCRIPTS)”. Previously, he was a policy analyst at the Organization for Economic Co-operation and Development (OECD) in Paris. Robert holds a Master’s degree in Global Politics from the London School of Economics.