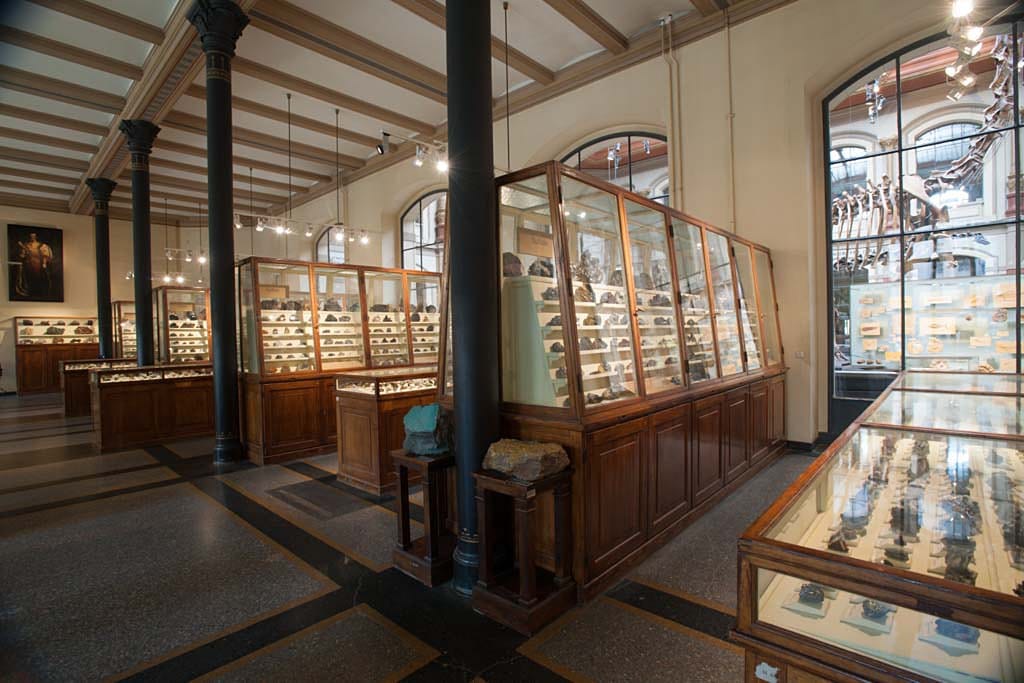 What a piece of quartz or a dinosaur's bone can tell about colonial practices of silencing the past.

During the imperial era, museums played a pivotal role in the often violent extraction of cultural heritage, natural specimens, and raw materials. In the last decades, artists, scholars, and activists have critically assessed this history, calling on museums to engage with their colonial legacies and take a stance against racism.

Surrounded by thousands of rocks exhibited in the Mineral Hall of the Berlin Museum für Naturkunde, we ask ourselves: what histories can these objects tell us? In the next room, we can see one of the most controversial examples of natural history: the dinosaur skeleton of Brachiosaurus brancai.

We wonder: are the collection practices of minerals and fossils comparable? Who collected them? How did they end up in the museum? These questions direct our attention to the provenance of the objects and the entanglements between natural history, colonialism, and extractivism. Departing from the history of minerals, our four interventions explore different historical contexts of colonial extraction in Africa, from Zimbabwe, South Africa, and Namibia to Tanzania and Cameroon.

Drawing on pioneering work by Fred Wilson and Clémentine Deliss, this interactive workshop asks the question: What is not visible in this room?

This event will take place as part of the Berlin Science Week CAMPUS. Admission is free. Please reserve your one or two-day ticket here.

Information about the physical accessibility of the Museum für Naturkunde can be found here.

Lukas Fuchsgruber is an art historian at TU Berlin. His research focuses on digitization in museums, photo archives, and the history of the art market. Since 2020 he is part of the research network “Museum and Society – Mapping the Social”. His case study in the project focuses on the question of museums and data policy, especially on the design of interfaces and the production and dissemination of museum data. In 2021 he was part of an open source project that released an community oriented archive interface: cooArchi. He is a guest researcher at the Museum für Naturkunde Berlin.

Yann LeGall is a postdoctoral researcher on the DFG-AHRC funded project “The Restitution of Knowledge” at the Institute for Art Studies at TU Berlin. His current research investigates the colonial history of plunder, the enduring presence of spoils of war from so-called ‘punitive expeditions’ in European museums. This project is led in partnership with the University of Oxford and the Pitt-Rivers-Museum. His PhD thesis examined postcolonial memory cultures in the context of repatriation of ancestral remains to African communities and countries. He has been a member of Berlin Postkolonial since 2014. As a member of the initiative Postcolonial Potsdam, he co-developed an audio guide on traces of colonial history in Potsdam, a city where he also leads guided tours.

Mareike Vennen is a cultural studies scholar. She is currently part of the research project “Museums and Society – Mapping the Social” at Technische Universität Berlin. Before, she held a Postdoc-position at Humboldt-Universität zu Berlin in the research project “Animals as Objects” (animalsasobjects.org) and has worked on the history of the Museum für Naturkunde’s Tendaguru Expedition. She gained her PhD at Bauhaus University of Weimar. Her work focuses on material and visual cultures of natural history, on practices and infrastructures of (colonial) collecting as well as political ecologies of urban natures.

Lennon Mhishi is a Project Researcher on the project “Reconnecting ‚Objects‘: Epistemic Plurality and Transformative Practices in and Beyond Museums”. The project is collaborating with partners in Oxford (UK), Cape Town (South Africa), Dakar (Senegal), Dschang (Cameroon) and Berlin (Germany) to, among other things, explore colonial collections and deliver two major exhibitions, opening simultaneously in Dakar and Oxford in 2024. He did his PhD at SOAS University of London. His work focused on the experiences of music and belonging amongst Zimbabweans, as part of the genealogy of African and Black expressive culture in the UK. He has recently been part of the Antislavery Knowledge Network at the University of Liverpool, working on how creative, art and heritage-based community-led approaches can be utilized in confronting contemporary forms of exploitation. This work has been through collaboration at different stages with partners and communities in Mali, Niger, Ghana, Uganda, Kenya, Nigeria, Sierra Leone and the Democratic Republic of the Congo.