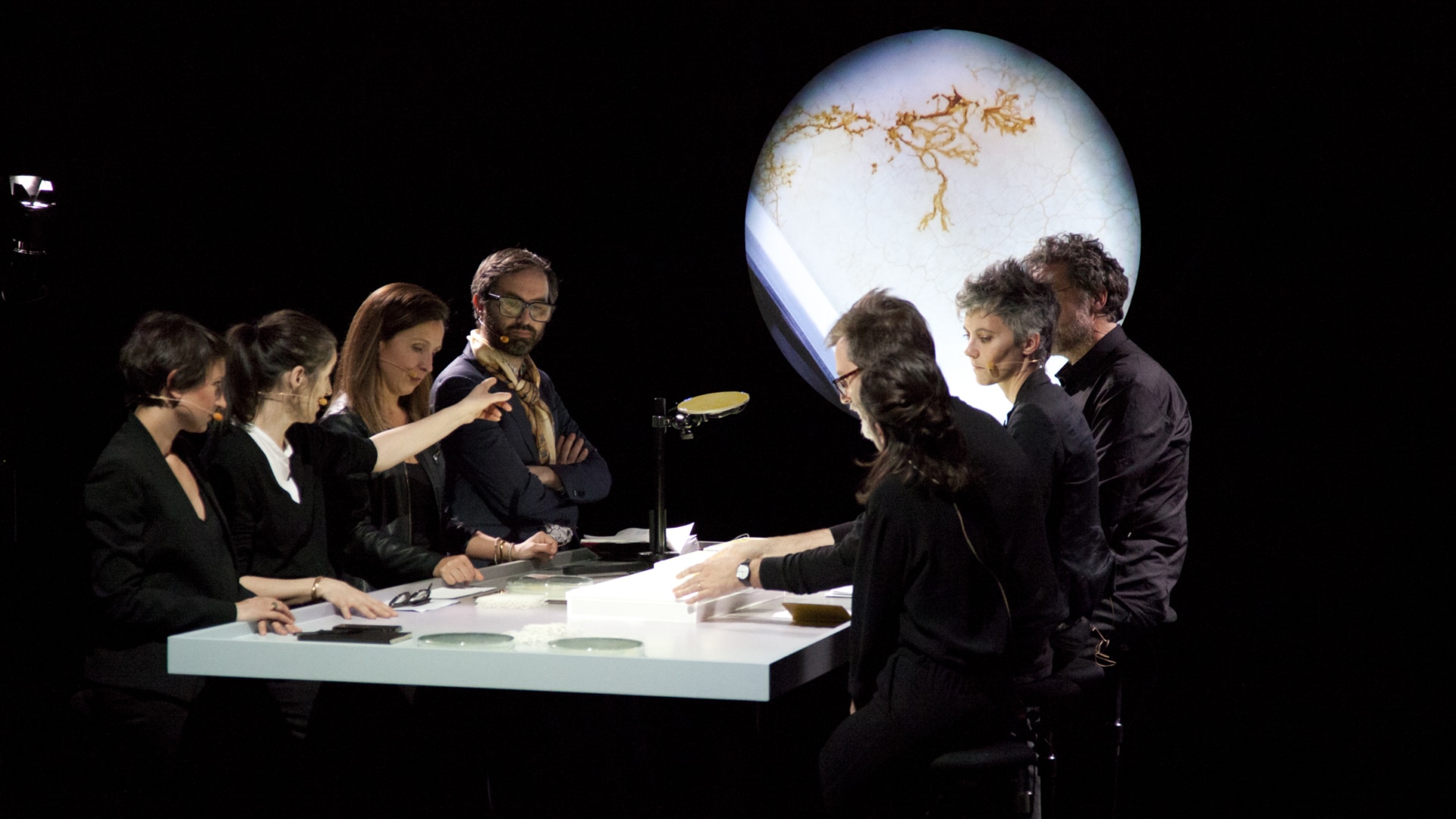 On November 2nd and 4th 2022, two Dissect events will take place at Tieranatomisches Theater (TA T) in Berlin. The second event will be organized in cooperation with the artist Tomàs Saraceno around the research led by the Material Form Function group and their exhibition Design Lab #13: Material Legacies at the Kunstgewerbemuseum (KGM) in Berlin. For the first event on November 2nd, go here.

Organized by the Cluster of Excellence »Matters of Activity. Image Space Material« at the Humboldt-Universität zu Berlin, in partnership with the Chaire Arts & Sciences of the École polytechnique, the École nationale supérieure des Arts Décoratifs (EnsAD)—Université Paris Sciences et Lettres (PSL), and the Fondation Daniel et Nina Carasso; the Kunstgewerbemuseum in Berlin, and the Tieranatomisches Theater.

Xenia Chiaramonte is a jurist and a socio-legal scholar. She graduated in Law from the University of Milan where she also defended her doctoral dissertation in 2017. She has been a postdoctoral researcher at the University of Bologna and Roma Tre as well as a CAS SEE (Center for Advanced Studies of Southeastern Europe) fellow at the University of Rijeka. Xenia Chiaramonte is interested in the intersection of law and social movements. Her research has moved from the ‘negative’ relationship between public law (criminal and administrative) and protests to a project on new social institutions designed to enhance the legal capacity to craft a fictional conception of nature.

Regine Hengge studied Biology and obtained her doctorate at Universität Konstanz. After a post-doctoral phase at Princeton University (NJ, USA), she completed her Habilitation in Microbiology and Molecular Genetics at Universität Konstanz. As a Full Professor she headed the microbiology unit of Freie Universität Berlin from 1998-2013, and since 2013 has been in a similar position at Humboldt-Universität zu Berlin. As a Principal Investigator at Matters of Activity, she is studying bacterial biofilms as an example of active matter with a focus on nano/micro-architecture and morphogenesis of biofilms. For her scientific research Regine Hengge received the Gottfried Wilhelm Leibniz Prize and an ERC Advanced Investigator Grant. She is an elected member of Leopoldina, EMBO and other national and international academies.

Peter Jäger is a German arachnologist, and current Head of Arachnology at the Senckenberg Research Institute and Natural History Museum in Frankfurt, Germany. He has described 513 new species of spiders within the last 20 years. Thunberga greta (named after Swedish climate activist Greta Thunberg) is exactly the 400th species he discovered. Over and over again, he uses prominent names to draw attention to problems affecting our planet’s environment. The best known example so far was the Southeast Asian huntsman spider species Heteropoda davidbowie. https://www.senckenberg.de/en/pressemeldungen/a-spider-named-greta/

Alice Jarry is Assistant Professor in Design and Computation Arts at Concordia University Research Chair in Critical Practices in Materials and Materiality (New Scholar), Design and Computation Arts. She is an artist, researcher, and educator who specializes in site-specific responsive works, socio-environmental design, digital arts, tangible media, and community-oriented projects. She is a member of Montreal-based Digital Arts Collective Perte De Signal (Montréal), Milieux Institute for Research-Creation (Concordia University), and Hexagram (Montréal). Her works have been presented in several exhibition locations in Canada, the United States, and Europe.

Alex Jordan studies the evolution of social behaviour in animals – the ways single individuals come together to form stable social groups, and the behavioural, cognitive, and neuroanatomical mechanisms that have evolved to facilitate group living. His research program encompasses traditional field behavioural ecology, computational ethology, physics of social behaviour, neurobiology, and most importantly evolutionary theory, aiming to understand both the mechanisms and the outcomes of social behaivour across species, with a focus on cichlid fishes and social spiders. His research is primarily field-focused, attempting to understand animal behaviour in the places it has evolved; Lake Tanganyika, the Mediterranean Sea, Coral Reefs in the Caribbean and Red Sea, as well as Central American rainforests.
He is a permanent Group Leader at the Max Planck Institute of Animal Behavior, heading up the Behavioural Evolution Research Group. He has held editorial positions at The American Naturalist and Movement Ecology. He is also active at the interface of science, art, and community engagement, working with artists and academies like Tabita Rezaire, SUPERFLEX, TBA-21, and Tomás Saraceno. Previously, Alex was the Integrative Biology Fellow, working in collaboration with Mike Ryan, Dan Bolnick, and Hans Hofmann at UT Austin, and before that a JSPS fellow in Osaka working with Masanori Kohda. He completed his PhD with Rob Brooks at the University of NSW, and did his undergraduate honours thesis with Madeleine Beekman and Ben Oldroyd at the University of Sydney.

Martin Müller is a Cultural Historian working at the Cluster of Excellence Matters of Activity where he is researching on the epistemology, materiality and operativity of the genetic code. Since 2015 he has been researching and teaching at the Institute of Cultural History and Theory at Humboldt-Universität zu Berlin. Research interests: Theory of synthetic biology and genome editing, history of biopolitics, genealogies of the technocene, theory of the postmetabolic. Visiting scholar at Waseda University in Tokyo (2019), Universidad de Buenos Aires (2017), Université Paris-1 Panthéon-Sorbonne (2013), Columbia University in New York City (2012).

Emanuele Quinz is an Art and Design Historian and Curator, PhD, Associate Professor at Paris 8 University and at École nationale supérieure des Arts Décoratifs (EnsAD), Paris, and an Associated Member of the Cluster of Excellence Matters of Activity at Humboldt-Universität zu Berlin. His research focuses on contemporary art theories and practices crossing disciplines, like visual, media and performing arts, music and design. Since 2012, together with Samuel Bianchini, he has been coordinating the Behaviors research project (Labex ArtsH2H, EUR Artec, in collaboration with the Centre Pompidou). He is the author of »Le cercle invisible. Environnements, systèmes, dispositifs« (Les presses du réel, 2017), and editor of several international publications. As a free-lance curator, he curated the international exhibitions »Invisibile« (Siena, 2004), and with L. Marchetti »Experience Design« (Bolzano, 2005), »Dysfashional« (Luxembourg 2007, Lausanne 2008, Paris 2009, Berlin, Moscow 2010, Jakarta 2011), and »Basic Instincts« (Berlin, 2011, Arnhem, Shenzhen 2012).